Makin' my own PCBs

Get back to the self made overview... 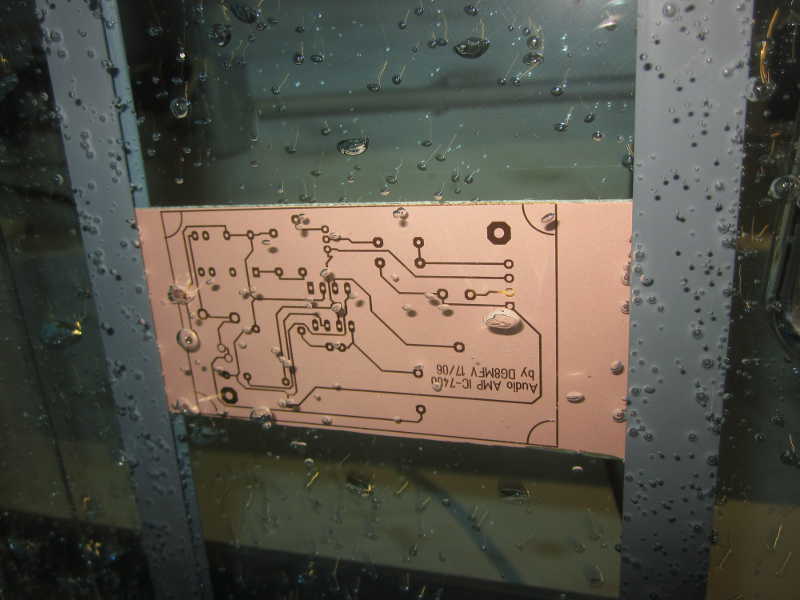 In the past i often could not realize projects because of not being able to make my own PCBs. There are several ways to realize it anyhow, but in fact i was not satisfied about all the circumstances with those dot-strip matrix boards and so on. During our pentecost holliday in Hungary i had the time to study all the ways to make your own circuit boards. Here are some links to youtube-videos showing the complete way from the print to the board:

All those videos have just been to give me an idea to come to a decission "how to start". After getting some established half knowhow ;-) i ordered some PCBs with photo coating, the chemicals and - the heart of the project - a PCB etcher from reichelt.de.
The only thing i had still to check was the way of exposing the boards to uv light. After studying the internet articles on that topic, i decided to make my first experiments with a facial tanner. I found a cheap one in eBay that i could pick up after returning from our vacation - even all the other things should have arived that time, so that the party could begin ;-) .
All in all i was taking care to have those things available for the first tests:
It was exciting - i had no idea, just theoretical knowledge how this all works. How should i design a PCB? I made several tries also during the holiday, and was sure to make my first tests with Target 3001.
Such a great Software! I had some knoledge about such software, but alle the other packages have been too complicated and -anyhow- not ver user friendly. With Target i was able to make my first circuit diagram and the board within about one hour. Have i already said, that i did not know this great program before?

The first project to be realized was a reactive light for geocaching. It consists just in an LED, a micro controller, a resistor and a battery pack that will be soldered on the little planes shown as a rectangle on the diagram:

Next step was to get the PCB layout. No problem with target: 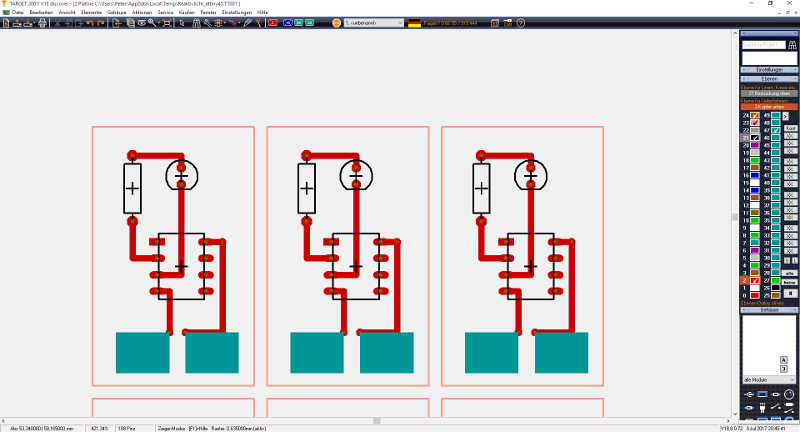 Now i had to find out the best way to exposure light onto the board material. Density is the main topic. If the density on your print is not sufficient, all the following steps will colapse.
So i was doing several prints on several media without even thinking of the boards so far. I tried with 55g paper and some special transparent spray, i used some transparent media for overhead projection and film specialy made for screen printing film production. Due to my job as presales consultant in the printing branch i have some experience with this subject. I tried it in combination with some printers, and among other things looked at the density, at the dots, dot gain, coalescence, sharpnes and - the most important thing - how the driver could be set up for my needs.
Anyhow, at the end i learned, that the good old EPSON Stylus Photo R285 is absolutely the best choice of my printers. I use it together with some inkjet film by Kaut-Bullinger To get the most suitable density, it is not always good to have the most black density. There is a phenomen called coalescence that can drive you nuts. If your printer supports changing the ink level, just give it a try. Maybe a lower ink level will bring you more density. The absolute insider tip is to use some yellow with the black ink. Most of the printer drivers won't support this, but if you have the possibility to print via a software rip or control the colour anyhow, use this way! You will be amazed, how much better the UV density will be. You won't see it with your eyes, but you will get much better results in the complete process chain. In my case it is not necessary. These are my driver settings in combination of the EPSON Stylus Photo R285 with KABUCO Inkjet Folie universal: 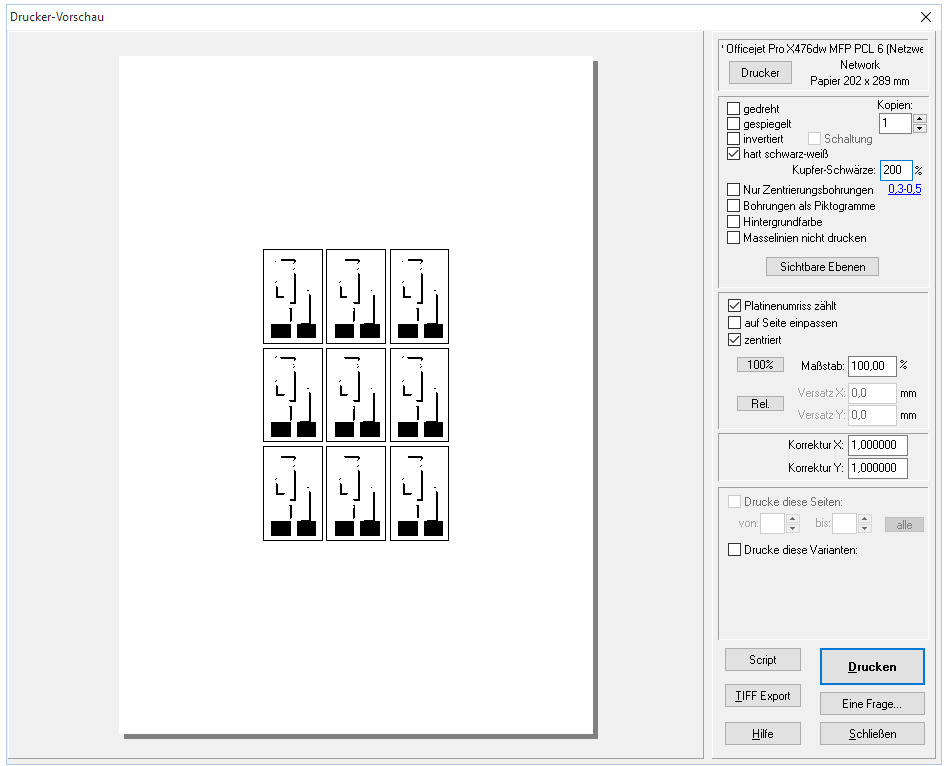 Please open the pics separately to get the best resolution to view them. 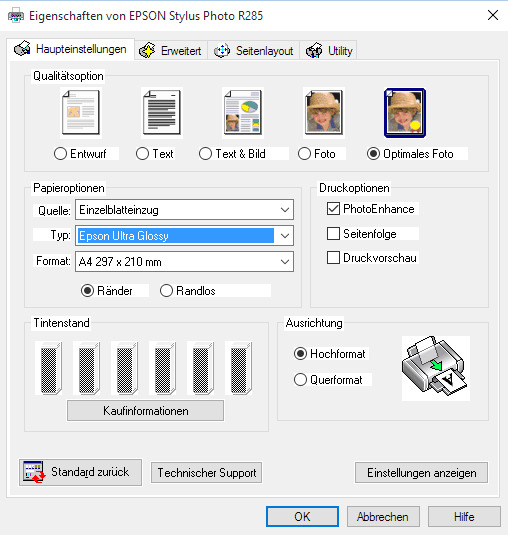 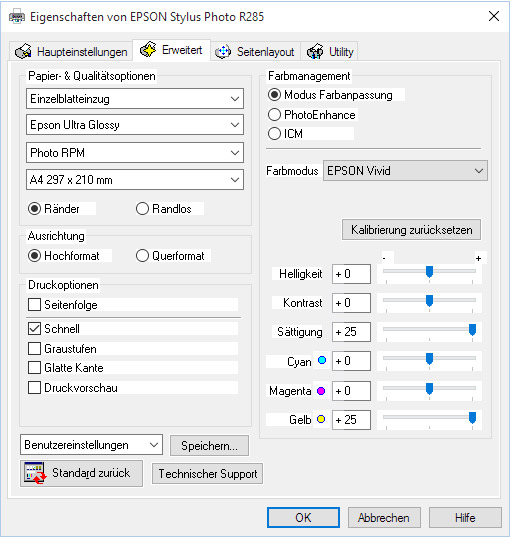 So now we have the film for the next step. Before we begin working with the board material we have to find out, how all the things work together. We have several things influencing our success:
Now let's come to the first trials: Like a child on christmas eve i was not patient at all. So i tried to make the first board without having any ideas. Please see my first results with some comments on it: 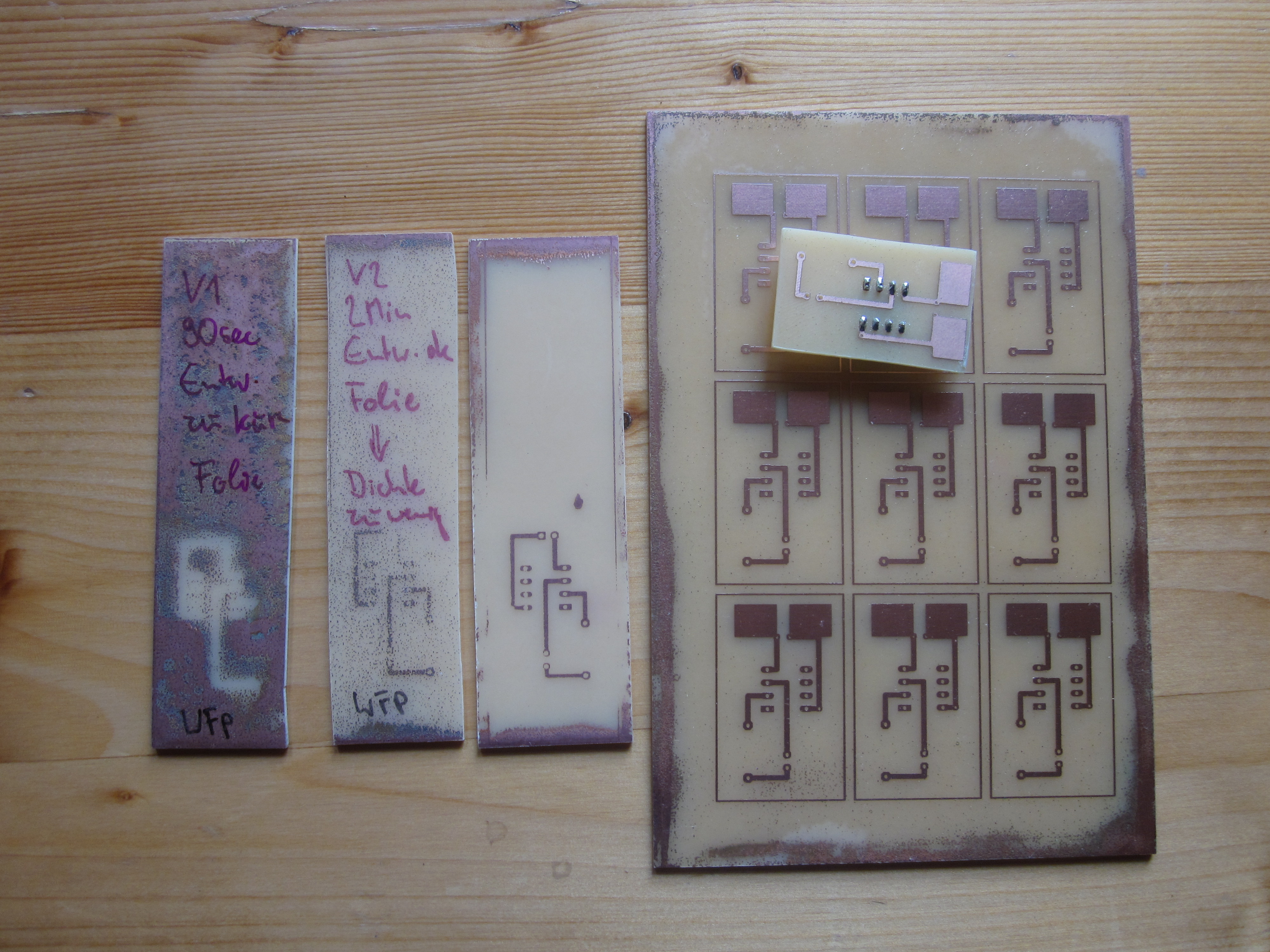 From left to right: My first attempt was just for the birds ;-) . I had no idea how long i had to expose and so the first test was a good exaple in "how to make everything wrong". The most funny thing was, that the etching fluid, that normally is from clear to a little bit blueish, turned into brown colour. The reason was, that the photo coating was not exposed and / or developed with the right time. I read the instructions of the board's manufacturer and found out, that the developing process must generate shiny copper surfaces within a maximum of 4 minutes. Otherwise the UV exposure is not long enough.

Version two was not inverse and brought some better result. I did this very first tests with paper and some transparency spray. It works, but in my eyes just as some expedient. Anyhow - i did not follow this way any longer and am not able to say, how much better the results can be at all. I also used my EPSON WorkForce Pro printer for that attempt. This printer's ink does not generate the adequate density at all

Version three is made in combination with inkjet film and the EPSON R285. It delivers enough density, but i used the wrong holders. My combination of a foam board and a 2mm thin glass panel was to stable enough, so the film was not really lying against the board. It's best to see on the small reference lines on the edge.

The fourth example on the bigger board shows my last try. It's working pretty fine in comparision with the first try. The only problem i still had, was that i always got those problems in solving the copper at the edges of the board. It has nothing to do with the clamps i use for holding it in the etching fluid. If it was so, i wouldn`t have those ugly stripes an all four sides. I guess, that this has to do with the board material. So this was the reason, why i changed to BUNGARD boards - what should i say: That boards work! 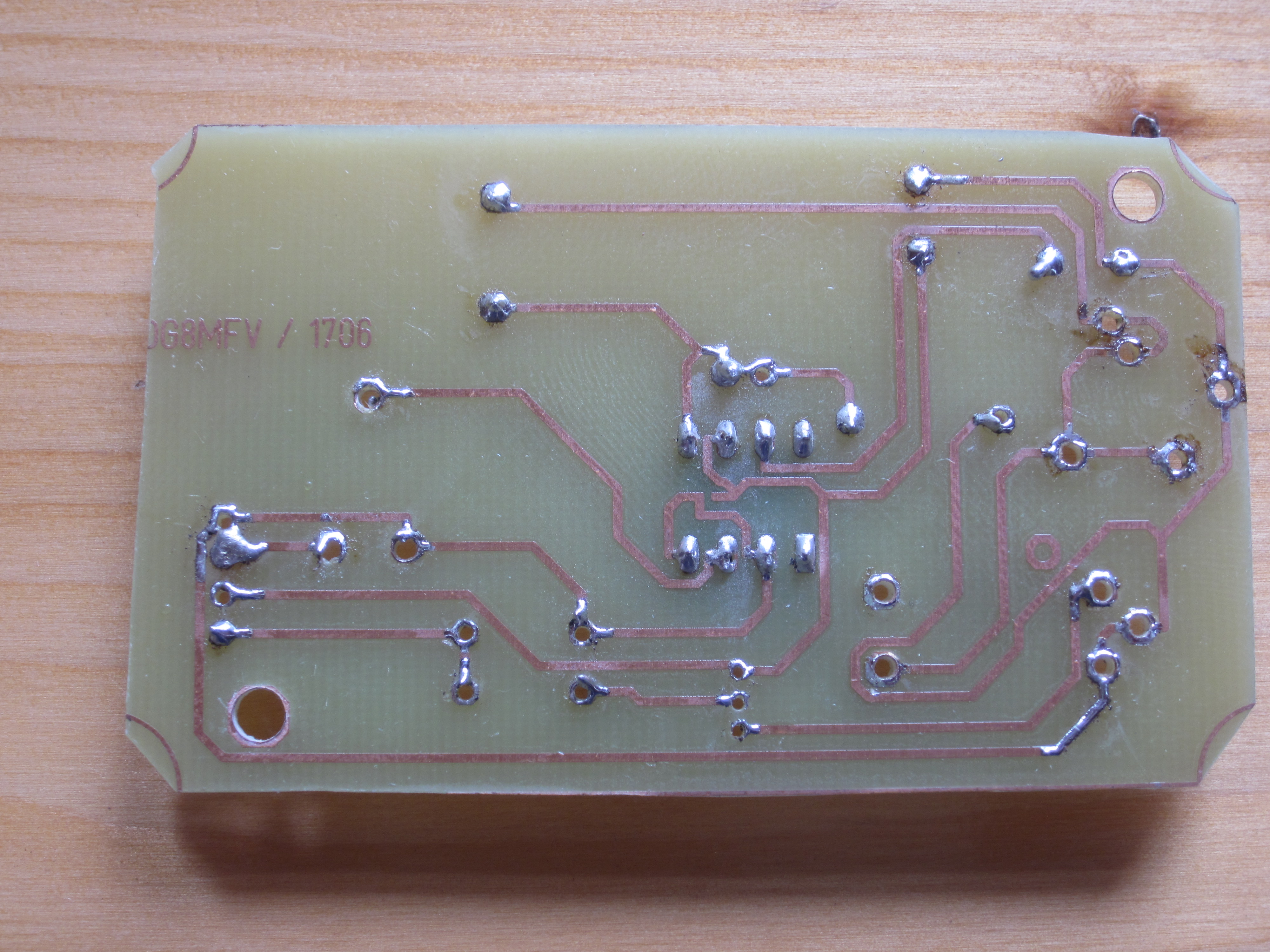 This is my first result with BUNGARD - it's an already used board, but it shows how good that process works now with my equipment. The parameters of the process are now: Exposure 80 seconds; Developing bath about 1-2 minutes - just watch until the copper on the exposed area is shiny and no further coating is being solved; Etching about 10 minutes with about 40-45°C (the first copper solves in 6 to 7 minutes, then it goes on fast)

You can find my "PCB making guide" here as PDF file

Get back to the self made overview...